Platforms Project is Athens’ Independent Art Fair, open this year 20th – 25th May. Artist groups from all over the world are taking part, including SCI, a group which developed out of Liverpool Tate staff artists’ Soup Collective (SC).  The ‘I’ in SCI stands for ‘including other artists’, which is how I got involved. 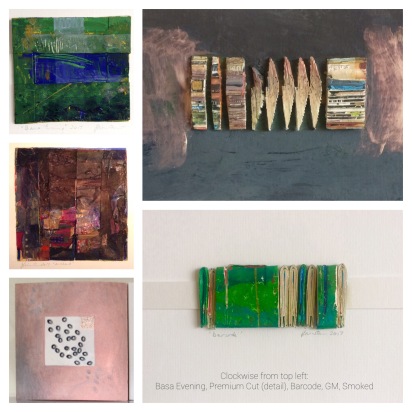 SCI’s theme for the fair is consumerism and branding and the exhibition, titled ‘CODED‘ includes work from 22 UK artists in addition to Soup Collective’s six members. In keeping with the theme, artists have used food packaging as a basis for their contributions (which also seems apt, given the group’s name!). I found this an exciting proposition, given my concerns about the food industry, packaging, processing and environment.

Barcode (hummus sleeve, acrylic paint and gold pen) involved folding and refolding the card sleeve, using acrylic paint as a glue. I often fold card waste in this way for recycling. It is also an act of apprehension and guilt, knowing the amount of waste we create through our shopping habits has been steadily growing within my lifetime. Fortunately card can be composted, unlike the plastic container, which usually gets put in a drawer for further use. The tightly folded card was then sliced to reveal layers and colours, and thus the title, echoing the common feature of all our processed food items. The flash of gold was an aesthetic choice, as were the greens, blues and sliver of red. I wanted to create a disturbance in the viewers’ response, so there are visually pleasing elements but also the suggestion of slicing and bleeding, control and labelling. This dual element runs through all of the pieces I made for the show.

Smoked (quiche box, watercolour and copper medium) includes the plastic film ‘viewing window’ in its construction of sliced and torn sections reordered to create surface reflections. After the initial cutting and tearing, the pieces were assembled on a flat surface but the effect of the broken lettering and branding was too chaotic for my eye, hence the introduction of copper medium and watercolours. This (unintentionally on my part) served to emphasise the straight cuts and flashes of remaining lettering, so it still had visual appeal but a messy, muddy feel. The title came from the one remaining, intact word. 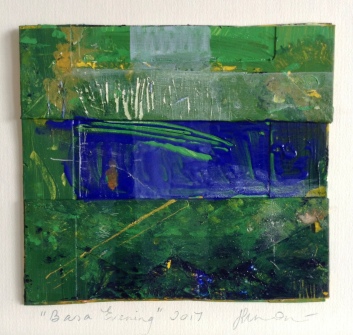 I intended to layer it up like Barcode but the suggestion of water and landscape was quite seductive, so I left it at the stage you see it now, adding only gloss varnish and gold pen to break the surface and alter colour, depending on the
position of the viewer.

Premium Cut (beef packet sleeve, PVA, acrylic paint and copper medium) is named after the wording that survived this process of layering and slicing. I used glue rather than paint to

join the layers and allowed glimpses of the packaging colours to peep through. I’d liked to have left it alone at this point but couldn’t resist adding a drab background lit up with a flourish of copper medium. There’s that conflicting impression going on for me, of a collection of precious objects plus the cutting, slicing and fluids. 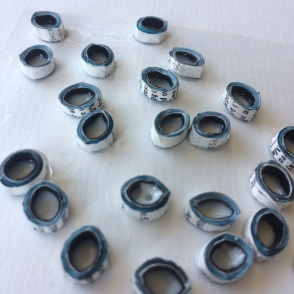 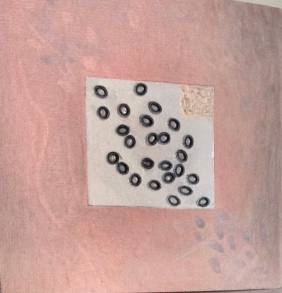 Finally, GM is an adhesive fish packet sleeve rolled around a drinking straw, sliced and attached to a flat surface with PVA. Acrylic paint and copper medium were added as before. ‘GM’, of course, stands for ‘genetically modified’ and I threw those little plastic seeds down like real ones and glued them where they lay. I probably overworked this one – of all the pieces it needed very little additions but to be honest I could keep going… but I’ll stop right there.